I've been using Drivepool for a couple of years now and it's been really stable and has generally great.  However, I have noticed an issue over the past few months in relation to file watches.  Specifically, in relation to Subsonic server that is running on my machine.

The scenario is as follows:  I have 7 data disks in my pool and most of my music collection is placed only on disk 1, as per a file-placement rule (see attached screenshot).  Subsonic (which is a Java application) has code that keeps a watch on the filesystem so that when new music files are added into my music folder, it will automatically detect it, scan the files and add to my music libary.  This was working fine, but I noticed that sometimes the files were never detected, even after I forced a scan.  Long story short - because disk 1 was getting full, some music files were being placed onto disks 2 and 3 when I copied them to my pool drive.  Subsonic a) didn't notice the new files and b) would not recognise the files as new even when I forced a scan.  Now, my assumption was that the software used NTFS file watches to detect new files, but that doesn't explain why files are not detected on a forced scan, which I believe from looking at the code is based on file/folder last modified timestamps.

If I manually move the music files from disks 2 or 3 on to disk 1, or clear up space so that the file placement rules move the files when I re-balance, then Subsonic detects the files.

My hypothesis is that Drivepool isn't properly reporting timestamps or filewatch system events when files are placed on to disks that are not the one(s) chosen in file placement rules.  It's taken months to work this out and I spent ages on the Subsonic forums (and talking to its developer) because I assumed that it was a problem with Subsonic.  I've now conclusively (and repeatably) shown this is a Drivepool issue.

PS:  I'm running Windows Server 2012R2 with all the latest updates.  I have no AV installed at the moment (I got rid of it while testing this, just in case).  I also use Snapraid for parity across my Drivepool disks, not that I expect that makes any difference! 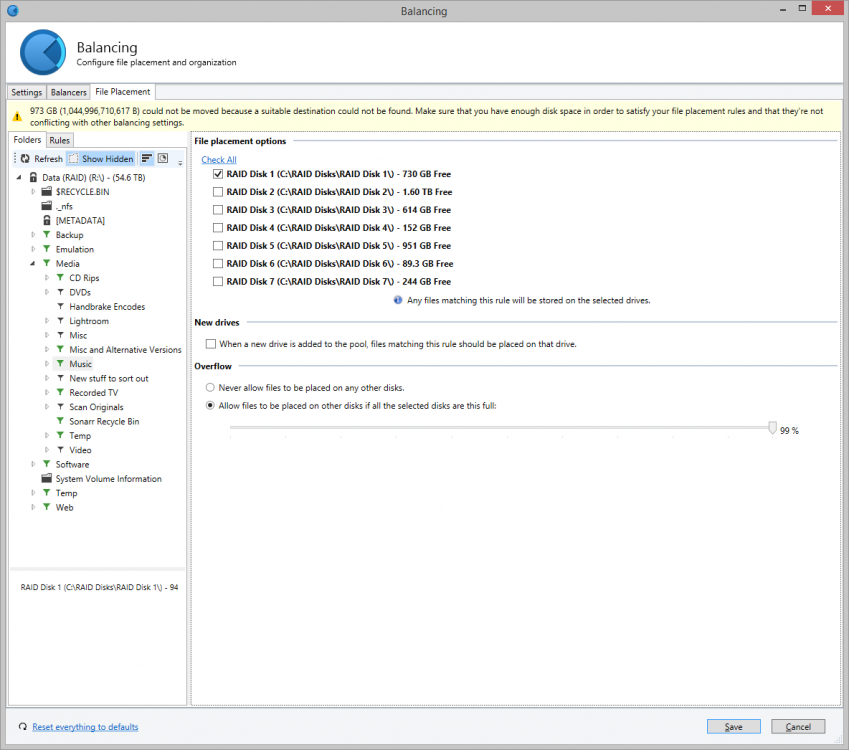 Edited September 23, 2019 by insleys
Correction of "are" to "are not" in response to comment.

12 answers to this question