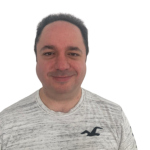 I hope someone can help me

I have a drive that I can't mount because the system is telling me it is already attached to a different computer (actually my pc, the same one I want to mount it to).... how can I fix that?

4 answers to this question