Balancer/DrivePool not putting Duplicate files on one particular drive in the Pool.

I have one DrivePool virtual drive, that initially contained two identical (bought at the same time) 3TB Toshiba drives. Both 3TB drives (E and F) are completely (their entire partition) used in the pool.

I run a simple policy/rule:

Everything was working great.

About 1.5 years ago, I purchased a third identical 3TB drive (G) and added it to the pool - which balanced (I thought) and I didn't think any more about it.

Roll forward to today, and Stablebit scanner tells me that Drive E (of the original 2 drives) has a few SMART alerts. No problem, time to take it out of the pool and replace it, but first, let's check what files are stored where?

This is where I have discovered some weirdness:

2. I thought that I might be able to re-balance manually, but in this version, the DrivePool UI has lost the "Rebalance" button - there is no way to force a rebalance from the current UI.

3. Now it could be, that the balancing was never correct in the first place, from when I added the third disk - because there is a tick missing, you will see, from the New Drives check box. However, if I select this and save, it is not persistent, so reopening that dialogue, gets the box un-checked again.

Given that the UI is now a little screwy for me, could I force a rebalance of duplicated files to (only) Drive f and (newly added) to Drive g, by unchecking duplicated files be located on Disk E? It's just that I am kind of nervous, that I have duplicated files - i.e. that I really don't want to lose (hence duplicated) on a drive that I know is on it's way out.

All advice gratefully received - thanks! 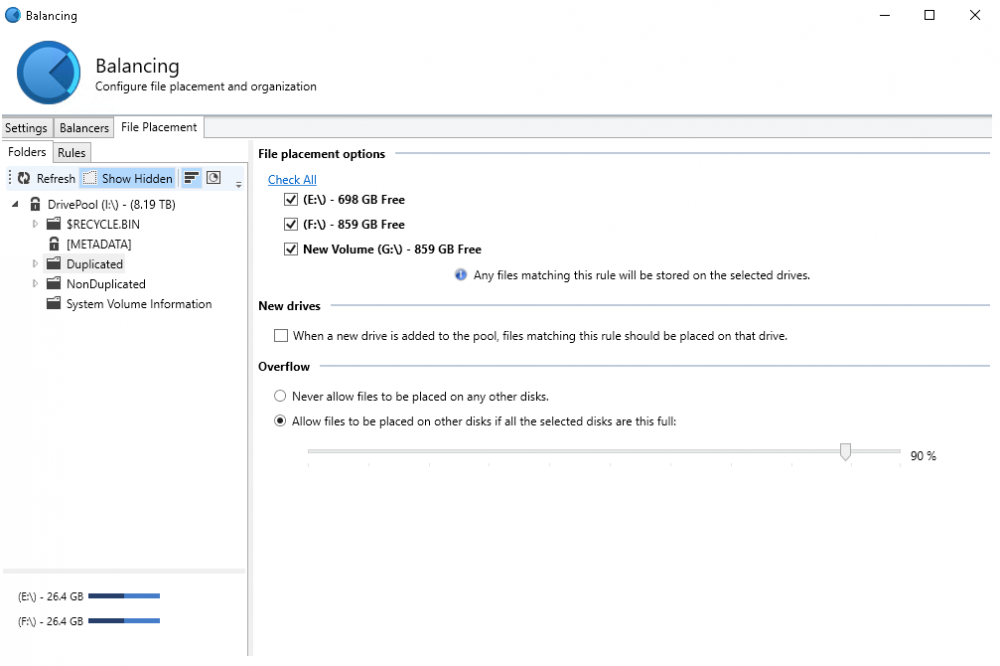