Hi. Recently installed Windows 19 Server on my new(ish) server. I've had a lot of problems with it with Windows 10, so I decided I'd try something more suitable since it's a server board, and it doesn't have a TPM so I went for Win 19 as I felt the earlier, albeit should work faster, but a bit old by now.

This is the first time in about 2 years now since last I ran that OS, and I had that for almost a year and bit by bit you get things working the way you want it to.

But, back then I didn't run DrivePool, so I never noticed a similar behavior.

First off, for some reason, the arrow (to expand) for "Performance" is closed after each reboot (Windows 10 left it open), which to me is a sign that something's wrong.

Secondly, the graphics area that normally shows disk activity is basically blank, and there's the animated throbbing bar which usually indicates it's attempting to retrieve data, but nothing ever happens, just grows and shrinks, grows and shrinks forever.

I'm thinking it's dependent on a non-working service or some API-thing that's broken/misconfigured or something, question is what?

Was previously annoyed by the default setting for task manager not showing the disk activity, and that was simple to fix with the "diskperf -Y" so that wasn't related (I think..?)

I think MS have quite funny ideas what's important for server administrators vs. desktop users. A number of things comes to mind, this with disk monitoring being one of many, others include fluff-graphic settings, hidden files/folders as default.

But, on the other hand, Windows Defender is quite relaxed, no alarms that goes off like a crazy hamster on crack just for disabling something. Still annoying, but better.

Otherwise, DrivePool seem to be working as it should. It does it's balancing and all that I've set it to do. It's just that I miss being able to see which files are being used on which drive.

Regarding the "Warning!"  on the image I attached- I've got a replication problem with the \System Volume Information\WPSettings.dat file and it's not related in any way I think. 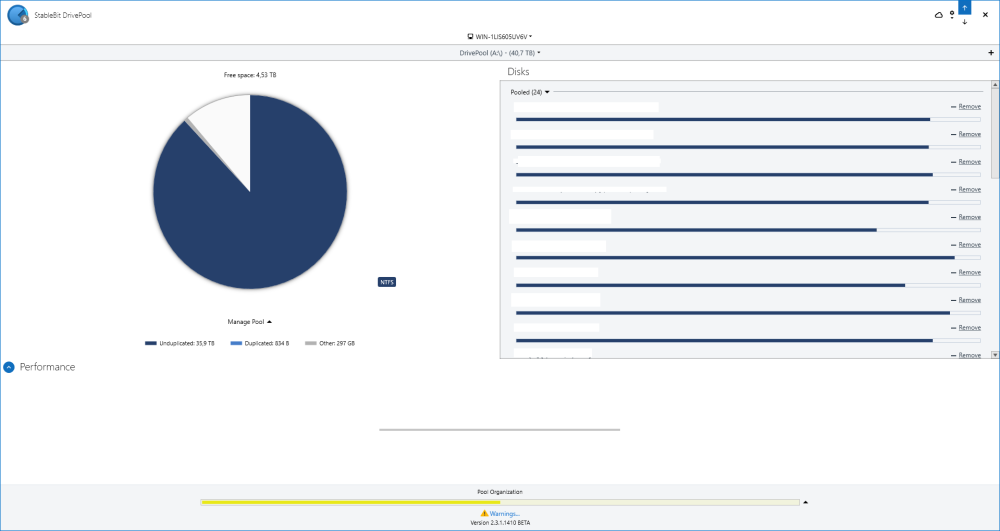 4 answers to this question