Im pretty new to drivepool. I am having an issue with my license key coming back as invalid. I suspect its due to reinstalling drivepool several times on the same pc.

Neither the activation through the software nor offline activation is working. Im hoping someone can get back to me for guidance on what to do next.

A bit about the second error I ran into yesterday: So when I initially wanted to setup a plex server, I was starting from scratch, researched as best I could. The more I researched the more I understood the settings for 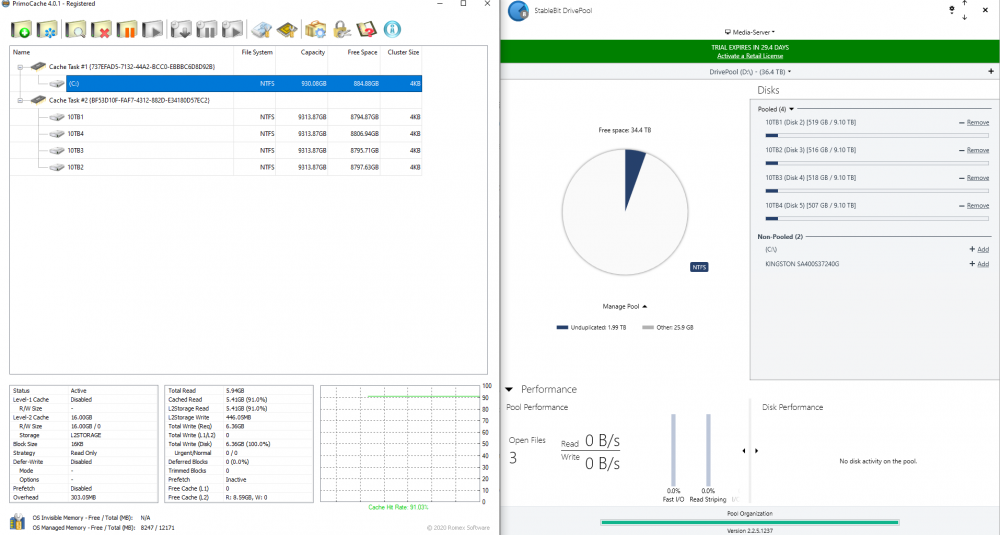 Because Im OCD, I setup my plex server several times from scratch and in that period activated drivepool (I believe approx) 3 times. (this is over the span of about a week and a half).

Finally I got the perfect setup (imo).

During a reboot my pc lost power due to a bad power cord. Swapped it out and ready to go.

The 3 10TB drivepool acted as normal. Never mentioned anything about the missing disk that was now part of its own drive pool. The new drivepool with the single 10TB drive was showing, had a virtual disk and all but not accessible. Data grey out. Couldnt remove it from its newly created drivepool, couldnt remeasure. etc.

I looked for a solution and fix to get my drivepool back to its intended 4 drive setup, but didnt come across anything that quite fit my situation. So basically what I did was uninstall drivepool, got rid of all folders associated etc (per a guide I found on stablebit for removal). I did not deactivate first which is another mistake I made.

I then moved the data inside each drives pool folder to a single drive (each drive only has about 500GB on them so far), formatted 3 drives and moved the data back, I then did the same for the 4th drive. Worked out well, although it took a bit of time.

Reinstalled and went to go reactivate drivepool, and no dice (invalid key). Like I said, Im pretty sure its my fault, as Im OCD and setup the system several times until I got it to what I consider perfect.

Any help or guidance would be greatly appreciated. I have put in a support ticket for the key issue and just waiting to hear back. Im using the trial version until I hear back from support.

In the meantime I though I would post about the weird issue of suddenly having 2 pools, and ask if anyone has any thoughts on it, has experienced something similar and maybe has a better fix in case it happens again. (Whether to me or someone else in the public)